FINALLY, everyone can now remove their spoiler alerts because the last person on earth to not see Prometheus has eventually gotten round to seeing it. Did I take my own advice about what to expect from with your film expectations? Well sort of. Read on if you’re interested in hearing my take, but be warned, if your are not from this planet and you’re still in the dark on the details, there might be spoilers ahead… 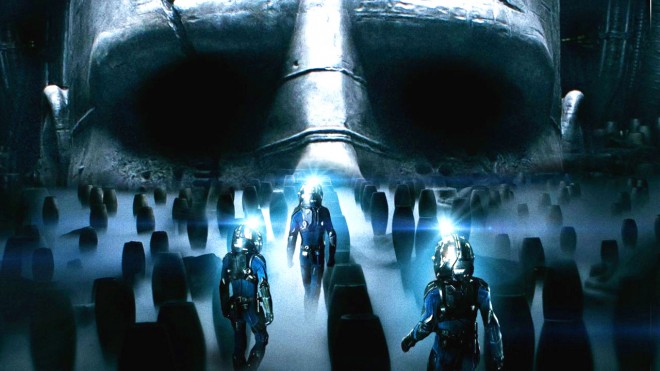 Ok, so I’d like to point out that I enjoyed the film. In it’s own right, it’s a damn fine film. We all know it’s been hyped to the hill so I’m not going to go on about the pit falls of that. Although I would like to point out (putting the shoe on the other foot) that without the hype, if it had been sprung upon us from nowhere, with no viral marketing, advertising or media hysteria, then no one would have seen it and it wouldn’t have been half as much fun to talk about.

Since watching it I have read some of the blog posts and reviews that people had been posting on Twitter that I had otherwise avoided through fear of spoilers. There are some interesting standpoints worth taking onboard, namely this post from a guy call ‘Cavalorn’ where he raises some interesting comparisons to Christianity and the basis of the film being around the ideology of selfless self sacrifice. It’s a good read, backed up with facts and quotes and is almost single handedly “forcing” me to go watch the film again (any excuse really). Overall, Cavalorn’s post is a positive one, but obviously we have the slightly more negative ones like Gavin Rothery’s post where he makes some valid points about the lack of characters emotional weight and value, which I completely agree with. There’s no room for the characters to breath and develop on screen and therefor no reason for us to cry or cheer for any of them when they meet their maker (pardon the pun),  but Gavin also chirps on about the physical improbabilities that are almost constant throughout the film, the idea of which I find slightly fussy. I remember a mate of mine saying he didn’t enjoy the 1998 version of Godzilla, not because it was it had Matthew Broderick in it, which would have been a perfectly plausible reason, but because he didn’t find it very realistic… He went to see a film about a gigantic, nuclear, mutated, French lizard, levelling Manhattan and he was complaining it wasn’t realistic! The clue is in the title of the genre “Sci Fi” – Just relax and enjoy it, it’s not meant to be a lesson in science, otherwise it would be called ‘Sci Fact’.

Things that do annoy me about bad Sci Fi films are things like poor soundtracks, cringeworthy dialogue, dodgy editing and bad characters, points at which Prometheus falls victim to on more than one account: 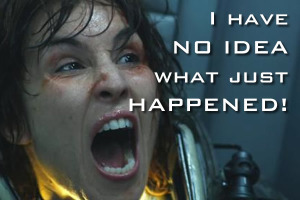 BUT… all this aside, I think the thing what makes Prometheus an enjoyable film is it’s message (pay attention Gavin) – “No matter how much you think you know, you’ll never know everything”. We (the humans) thought they could shoot up beyond the stars and figure it all out – WRONG! We thought we could stroll right through the front door and get answer to burning questions like “So was it the chicken or the egg?” – WRONG! And where I think Prometheus is so interesting is it suggests that even our makers got it wrong as well. Something happened that they didn’t expect, something made them want to wipe us out, and something hit the fan. To reference the late great Dr. Ian Malcolm’s ‘Chaos Theory’ or simply ‘Murphy’s law’, no matter how much knowledge, power or experience you think you have, unexpected things can and almost certainly will happen. Things won’t always make perfect sense because we don’t know everything! “Why did this happen?” “That wouldn’t have happened in real life” “Why didn’t they do that?” …LET IT GO! Then I think you’ll enjoy the film a lot more.

Another thing I’ve found funny about people’s reactions to the film is that there were so many questions left unanswered. This is funny for 3 reasons:

Other points of note (Good and Bad):

I’d love to go on in more detail but I fear no one has even made it this far, so I’m going to stop now. If you have made it this far then well done you (you need to get out more). It’d be great to hear what you thought about the film and my take on it. Agree? Disagree? Post a comment below: