My Second Best Ever Score

In the buildup to my much anticipated summer of golfing for 2015, I’ve been trying to get out as much as the winter weather/work will allow, to get as many holes under my belt as possible. This Saturday I played Mersey Valley Golf Club with a tee off time of 14:20 and a sunset of around 18:00, I was able to take advantage of one of the course’s twilight offers, but perhaps not get to finish my round – literally ‘a small price to pay‘ for a bit of practice I thought, however things started well and after 6 holes I was finishing my round no matter what. “A Score” was on the cards.

My personal best score was shot on July 16th last year at Widnes Golf Club, and while it still remains my lowest score I was more excited by the numbers I shot on a damp and windy Saturday in spring this year, but first here’s a look at my best card from last summer: 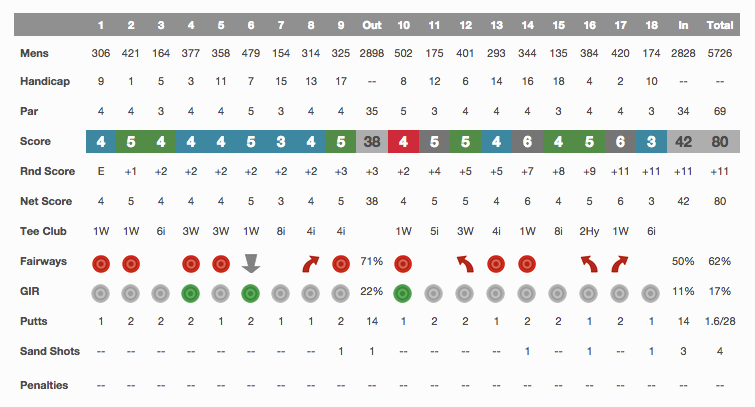 The par at Widnes is 69 so I was +11 in total off the back of a consistent front 9 and a rather lacklustre back 9, but the real story behind this score was the shocking GIR (pretty standard for me) and the impressive 28 putts across all 18 holes (averaging in 1.6 per hole). Not that I’m taking for granted the fact that I had zero penalty strokes and a decent 62% fairways hit, it’s fairly safe to say this score could’ve been dramatically better with a high GIR percentage. In contrast, let’s take a look at my more recent “2nd best”…

…But before I do it’s worth saying that, as many local golfers will testify, Mersey Valley is a much more “leisurely experience” in comparison to Widnes. Despite Mersey’s higher par and longer length – it’s wider, has less trees and has much more forgiving fairways, but nevertheless… 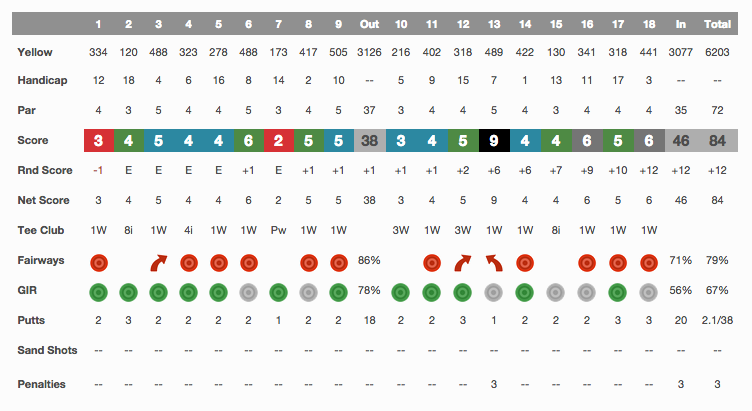 In stark contrast to the “better” card mentioned first, here I managed to substitute that 17% GIR for a much healthier 67% and I even managed to up my fairways hit by 17%, which I was most pleased with, leading to zero sand shots and penalty strokes (from the fairway anyway) and I see this scorecard as a solid foundation to start shooting some decent numbers and a true testament to the hard work and approach of my zen like coach – Adrian Fryer (@SolidGolf).

Despite my putting average going up to 2.1 putts per hole, that’s not my main beef with this card. It’s doesn’t take a keen eye to notice that glaring black “9” on the 13th hole. I think I can put this score down to mixture of excitement, fatigue and mainly (and most importantly) poor shot selection. The wind was howling into the teeth off the tee and instead of just knocking 3 easy long irons I tried to smash my driver through the wind resulting in some dramatic “over exuberance” and me being 3 off the tee plus having to suffer a further penalty drop as a knock on effect. Why? WHY!?

Anyway, I’m over it… honest 😉 and now that I’ve finished beating myself up and over analysing it, I have decided I am happy with my most recent score, and for a steadily improving amateur, who is currently off +18, I think if I can keep these stats going there’s got to be some good scores just around the corner. Bring on the summer!

My moral for this story:

Golf is hard enough, don’t make it harder by not thinking!