Having just got back from a screening of It Follows I thought I’d try to put my thoughts down on this much anticipated indie horror thriller.

As I’ve said before (in my Babadook review) “I’m not a massive horror fan”, but this film had been heavily tipped as “A Future Classic” by the much respected Danny Leigh, I’m always drawn to the prospect of a “Great” or “Classic” horror. Sadly ‘It Follows’ falls to fall into either of these categories for me.

I think I summed it up well in my tweet:

#ItFollows – retro yet poignant relevancy. Great premise + craftsmanship yet not equal to the sum of these parts. Lacking in conviction

This film takes an eye rollingly, cringeworthy premise and turns it into something that actually works. The idea of sex being the catalyst to initiate a curse on someone when the cast is made entirely of teens could have turned out to be the kind of movie that gives horror such a low bench mark in modern cinema. However, the storyline is suprisingly tangible and gripping. The combination of it’s gritty indie cinematography and a kick ass 80 retro synth soundtrack really helps to ramp up the tension, but “it” just doesn’t “follow” through (ahem, so sorry) with it’s own convictions. The film lacks a point and seems to pull it’s own punches and therefore not leave any sort of permanent mark on it’s audience. This film is unfortunately forgettable.

It’s such a shame as I think the subtext of this movie is relevant and very poignant and it could have had a lasting effect on the minds of many people, in much the same way that some people still wont swim in the sea because of Jaws. Not that I’m getting on my high horse about some sort of prevention for the whole act of casual sex here, it’s just the sort of “activity” where people could have been drawing reference to this movie for years to come, but sadly it just doesn’t hit home.

I enjoyed the movie, it’s a good bit of fun, but I fear it’s just another victim to it’s own hype. It’s very good B movie fodder (I say that as a compliment) which could have been much worse given the concept, but it just lacks some real balls (no pun intended) in the final third…shame really 🙁

“This thing, it’s gunna follow you. Someone gave it to me, and I passed it to you.” 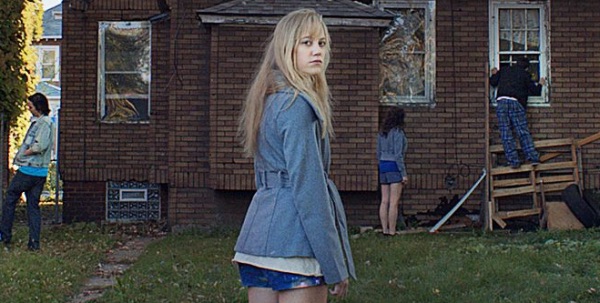