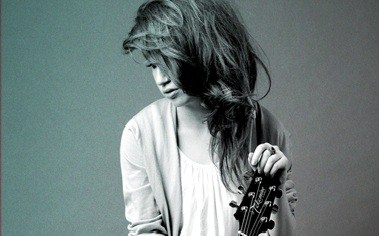 I’m fighting with a strange concoction of feelings towards this video. I think I might be running the risk of sounding like an old fuddy-duddy when I try to explain myself, but here goes…

I’d like to start of by saying, here we have an extremely talented artist, to the point where it almost seems pointless saying things like “she’s one to watch” and “she’s going to be big”. There is no doubt in my mind that Marie Naffah is THAT good. Fantastic even.

I’m not one for listening to much folky acoustic stuff, the odd splattering of Turin Brakes and that’s about it, but Marie’s got the talent and ability to make even the likes of me sit up and listen, and then listen again. How so you ask? Well, aside from the fact that she plays her own music (bonus points for playing in that sort of “sidesaddle” lap style, normally more attributed to steel guitar players), she also sings with a familiar yet outstanding voice. It’s smooth but gritty, common yet unique. The whole experience is probably not as alienating as my words are probably making out, it’s warm, charming and an utter joy to behold.

The next thing of note is the subject matter, a girl who has lost her sight. Now, this could be seen as a shameless plight to tug at peoples heartstrings in an attempt to gain some sympathy votes, but Marie tackles the story with admiration, tact and a heartfelt sense of respect. Clearly there are no issues in the song writing department either.

So what’s wrong with the video grandpa? It’s simply one take from the studio. There’s nothing wrong with that. My beef is with the blindfold. Ok, yes, I get it, it’s the name of the song and the girl in the song is blind, but there’s really no need for gimmicks here. Is it impressive that she can play the guitar blindfolded? Yes. A neat little party trick indeed, but it’s all of the points I stated above that make this song everything that it needs to be and more. That’s the real talent. Maybe I need to lighten up or get with the program. Or maybe Marie wanted to ruffle a few feathers? After all, it has pushed my fingers into typing this review. Hmmmm…

Ironically for being a studio production, the recording isn’t the best, but that really doesn’t matter here. The video is a showcase for Marie’s talents, I just wish the circus skills hadn’t made an appearance.

I can’t wait to hear more of what Marie Naffah’s got to offer.

be the “cream of the crop talent” and “one to watch” having played a number of high profile gigs around London such as The Troubadour, PUNK, The Old Queen’s Head, The Brixton Jamm supporting Two Door Cinema Club’s performing their DJ set and many more. At only 19, she has also recently played in Paris, Sheffield, Nottingham, Leeds and Edinburgh as well as festival such as  Winterwell Festival in Gloucestershire and Good Weekend Festival in Hampshire this summer as well as playing at the Station Sessions Destination Festival in July.

Naffah has recently just been featured on BBC Introducing Sheffield, Balcony TV London, and was appointed unsigned artist of the Week back in May 2011 on Absolute Radio with Sarah Champion describing her track “Star” as a “gorgeous acoustic song with a folk story telling feel”. Also Dan O from XFM Radio describing her track ‘The Busker’ featuring an upcoming artist Barny Scott– “they may have struck gold. The Busker is a brilliantly observed piece of music”.

Arguably her most original piece, she plays a track blindfolded, about a girl who has lost her sight,recently featured as top video of the week on NME breakthrough.