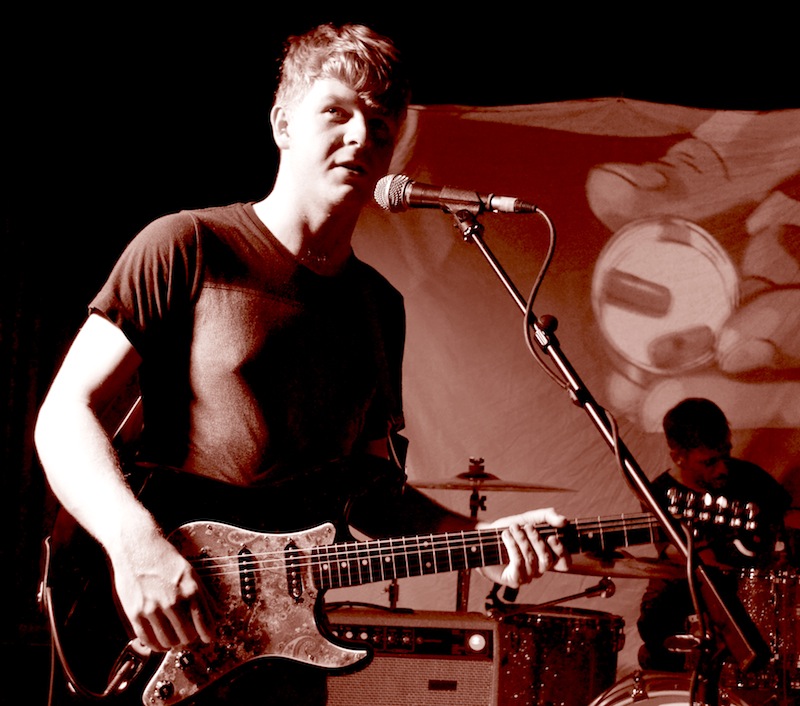 Welcome to Newpath’s anti vocal night. Let’s face it vocalists are overrated – always hogging the limelight, prancing around stage, when we all know the real graft is happening just behind them… ok, I jest, but the guys at Newpath seem to have latched onto a bit of niche with this one. Tonight, vocals take the backseat and it’s time for the guys with the hardware to take centre stage, in what is probably a 90% vocal free gig. Interested? I was too!

Firstly, I’d like to apologise to the Some Rabbits guys, I wasn’t early enough to catch all of their set, but of what little I did hear, it sounded great. I don’t want to do them the injustice of a half arsed review, so maybe next time guys.

Dead Sea Apes start up with something akin to a Black Rebel Motorcycle Club track. Overdriven bass, riffing guitar, pounding drums and feedback aplenty, all wrapped into a coherent and sensical hard rock song. It’s edgy, yet refined. Melodic, but not stuffy or pretentious. The crowd soon realise there’s a class act on, and the 4 people at the front of the stage soon turn into a decent shoulder to shoulder crowd.

They warn us that their 2nd song is a long one (as if the first one was short), but everyone in the audience is onboard and no one minds. As their set progresses we delve deeper into the realms of stoner rock. To put you in the picture, they play a total of 4 songs in a 30 minute set, but song number 4 was the right one to end on – climatic, telling and true to the bands style, not to mention downright awesome. The drums are solid and tight, and the bass really drives the melody of their tracks, which leaves the guitar free to contribute with licks and bits of feedback, instead of just just chopping out a rhythm. Dead Sea Apes are a refined and balanced 3 piece that somehow remain edgy and interesting.

Next up, Lost In The Riots, who blast onto stage with some all Americana rock, but then they kick in with some straight up nu metal, before going into some melodic post rock, and then some mental math rock… I’m struggling to keep up here. I clutch at straws like The Beautiful Mistake, Brand New, Papa Roach & even System Of A Down… I could probably go on to try and name another 10 bands, but it’s clear they draw influence from a number of artists and then mash them together one after another, in what I’m going to christen “A.D.D. Rock”.

There’s noodly guitar parts followed by monstrous killer riffs, followed by clever little rhythmic breakdowns. It’s interesting, but 2 songs in and I’m starting to wish they would just pick a style. The problem is these guys are good. They start playing something that makes me think “Oh Yeah!” as they crush out a monster riff on stage, but then I’m rudely interrupted by something completely different… “Hang on! I was listening to that…” While change and diversity in songs can be a good thing, it should be calculated and considerate, but this feels a bit sudden and a bit forced, like each member was queuing up to put their ideas on the table.

Lost In The Riots @ Mello Mello

Then things start to make sense. Song number 3 is a heavy riffing track that’s cleverly comprised by the variously intricate parts, that drop in and out purposefully, not randomly. It’s a well thought out, punchy and rhythmic. Then, in a change of pace, song number 4 is slower but manages to stick with itself. It’s heavy and loud but feels a bit safe in comparison to the rest of the set. The last track feels like this is what the band should be playing. It’s intelligent and choppy but feels right and well thought out. A collaborative affair of various parts that work well together, instead of feeling random, it feels like it comprises of parts of the same song.

Then… FUUCCCKKKKK!!! Alpha Male Tea Party take the stage and they are the definition of LOUD! Bringing their version of my “A.D.D. Rock”, only this is different, each part sticks around before moving moving on to something equally as interesting and clever as the last.

I had previously read another live review that drew a comparison between AMTP and Rage Against The Machine, and after listening to their debut self titled album I couldn’t see it myself, but listening live, Tom Peters’ guitar smacks of Tom Morello. There’s loads of Biffy Clyro in the mix as well (you know, back when they were good) but then there’s some nu metal drum and bass sections that have a similar tone to that of Limp Bizkit’s rhythm section (sorry guys, I mean this as a compliment, honest).

I notice drummer Greg Chapman look apologetic about something he played incorrectly, but I’ll be buggered if I could hear it. The error must have been microscopic because tight doesn’t even begin the describe AMTP.  Anything less than tight just wouldn’t work with their style. With the proficiency of these 3 very talented musicians, flexing both technically and rhythmically on stage, while playing mostly instrumental tracks, it would have been very easy to come across like a bunch of self-indulgent wankers, but they manage to avoid this pitfall, which is no mean feat.

AMTP prove it is possible to play well and concentrate on your instrument while still looking like you’re actually enjoying yourself. Having good stage presence goes a long way in my book, and it means a lot more than the “cool” statues would have you believe.

They debut a new song which has real teeth, venom and swagger. A menacing, all killer no filler track. You will struggle to find a naughtier bass tone anywhere else. Their last track “Depressingly Shit Lunchtime Sandwich” (possibly the best song title ever!?) shows AMTP aren’t all about the noise (not always anyway) as it starts with something that would fit in the Los Campesinos pigeon hole… but then the inevitable noise kicks in and it’s awesome.

The guys are keen to mention the petition to save Mellow Mellow. Tom says “Mellow Mellow has been so important to us…” “…it’s a real treasure”, and you know what, if the quality of this gig is anything to go by, he’s absolutely right!

Sign the petition to save Mello Mello yourself right here!

Lost in the Riots

← Music Shots Why Digital Projection Is NOT A Bad Thing →