My First Hole In 1 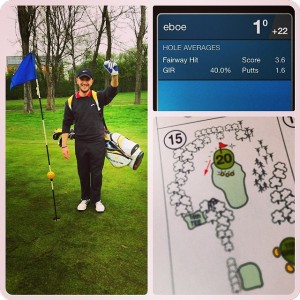 It was the cool morning on the 2nd of April 2014. I’d dusted off the clubs from their winter hibernation and had played a handful of rounds in preparation for making the most out of 2014’s summer. Three of us hit Widnes Golf Club as visitors and to say I’d had better rounds would be an understatement. Going out in 47 I had to pull some shots back coming in to hit my spring target of sub 90. It wasn’t going well, until… 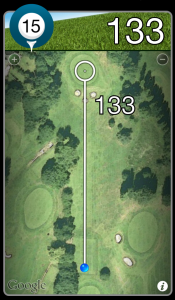 No one was playing particularly well. So dragging our heels with slumped shoulders we made it to the 15th hole. A short 133 yarder, which is stroke index 18, yet it boasts 3 green-side bunkers protecting the front. It’s an awkward, twitchy little hole, that sits between clubs for most golfers.

My GIR for the day was poor and my approach play had been missing right, so I decided to try and play a gentle 7 iron, which normally going around 145 for me, instead of trying to flush an 8.

The shot was fractionally thin but bang on line. Unfortunately, the entire green is hidden on the 15th at Widnes due to humped banks of the bunkers at the front (another reason why I think it’s not such an easy hole), so we had little idea of what happened to the ball. Did it hit the flag? Fly straight in? Roll up with just enough weight? Or just simply fly off the back? We will never know how it happened, but I do remember looking at my playing partners and thinking “that’s got a chance”. It was a jittery walk to the green. 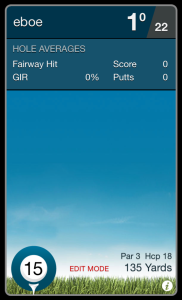 The happiest moment in my golfing career

When we got there, there was no sign of my ball. I was 50/50 at this stage. As the shot was a bit thin I was thinking there was a good chance it had ran off the back into the trees. There was no pitch mark. We shuffled to tentatively look in the hole… and there it was!

I wasn’t quite sure what to do at this stage, so we all settled for jumping up and down like school girls, before being asked to “turn the radio down” by some of the clubs more elderly members on the adjacent tee. We explained to them what had just happened in an attempt to excuse our actions, to which they replied “Oh well, mines a whiskey then“.

The amazing thing was, the way we each then played this hole after I had scored a one – the others then birdied and parred. After all three of us had been under performing, we each played the best golf shots we’d played all day. Six shots in total from three players on one hole is good scoring as far as I am concerned. It’s safe to say the golf gods took pity on us on this hole and made sure we hit the bar with smiles on our faces, instead of wanting to put our clubs on eBay.

I’ve came close on a few ocasions since then, lipping out and hitting the flag, but I think this might have been a one time deal. Either way I’m happy I can always say “I’ve had a one in one!”.